Lessons from a Summer of Free-Range Parenting

Not long ago, I casually mentioned to another mom on the playground that my boys have been to the emergency room six times, twice by ambulance. Eyes suddenly opened wide, she slowly turned her head toward me to gauge my expression. (Was I serious? Was I appropriately horrified by that absurdly high number?) I understand. It wasn’t that long ago that I probably would have reacted the same way had the tables been turned. But ten years into this parenting journey, I’m starting to get a better handle on what kind of parent I want to be, and who I want to be is, in part, a mother who allows her children the kind of freedom that means that sometimes they will get hurt.

Still, this doesn’t always come easily for me. I fight my natural tendency to be a mother who protects at all costs. I’m bombarded by the message that the best kind of parents are those who know exactly where their children are and what they’re doing every second of every day. I question my choices when harm befalls children given this freedom, especially when the stories hit far too close to home. But I am determined to continue trying.

In fact, I recently realized that the two primary ways I assess my success as the mother of young children are 1. how kind they are to others and 2. whether or not their knees are skinned. So this picture of the boys in Maine this summer positively makes my heart sing. Their legs are bruised, scraped, bug bitten, and covered in sap and dirt. Just as they should be. 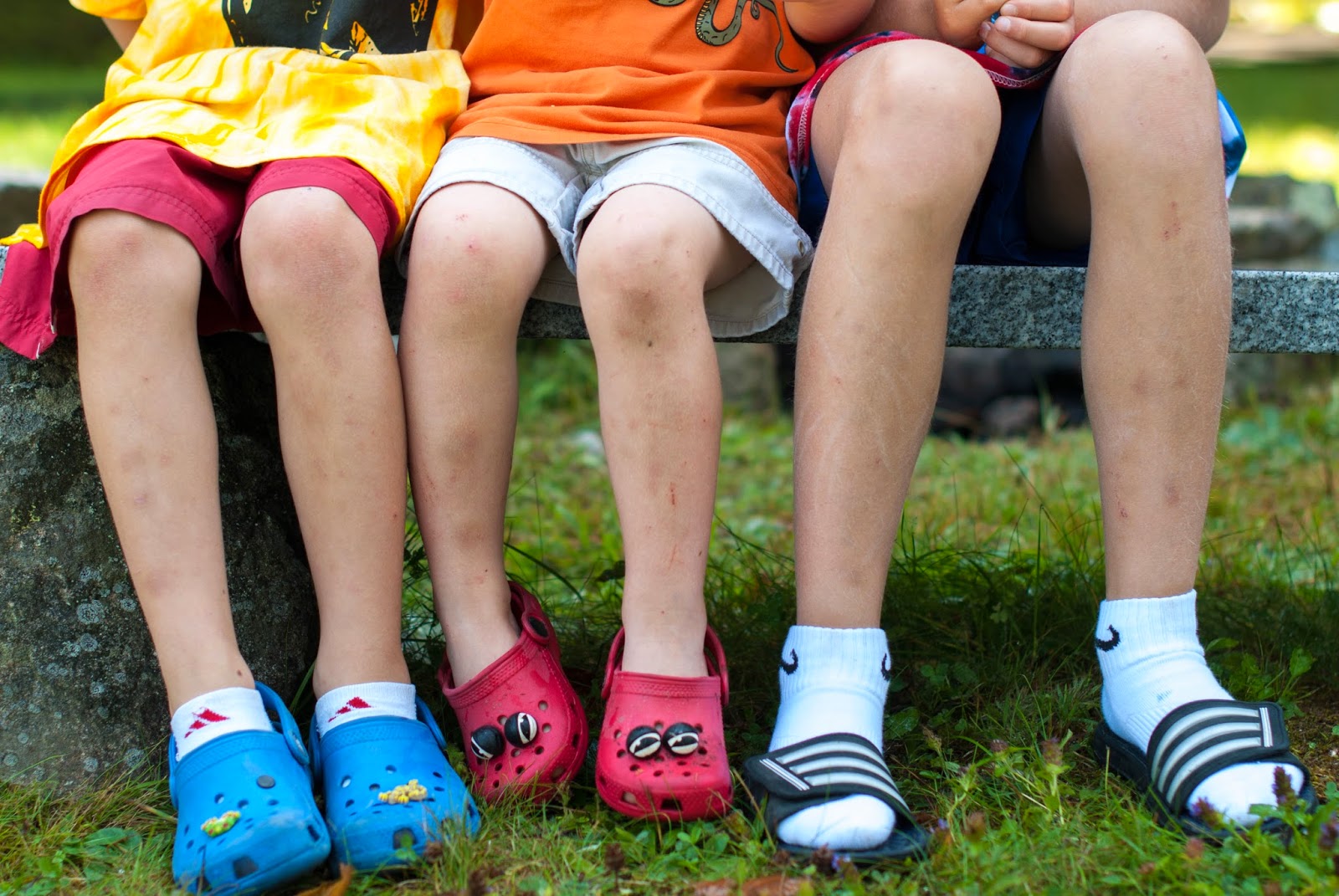 One of the many reasons I am grateful for our annual vacation in Maine is that it provides the perfect opportunity to parent the way I long to, largely free from all the influences that constantly whisper to me that I might be doing it all wrong. Our family spends several weeks in a cottage in a spruce forest on the bay. We leave to hike mountains and to restock the pantry, but much of our time is spent in camp with hours upon hours of time to just play. Play for me involves reading and crossword puzzles and naps, but for the boys, it means large swaths of time spent outside. My husband and I provide a few basic ground rules (like “You can’t go down to the float without a life jacket.”) and then let them run free. These are snapshots of what happened this summer:

I’m certain much more happened that I know nothing about. The boys spent hours tromping through the woods but reported on only a fraction of that time. Maybe one day they’ll tell me, when there’s enough distance that I’ll laugh rather than cringe. Or maybe they’ll hold those memories tightly and reminisce only with their brothers and cousins, their partners in crime. Either is just fine with me.

As a parent, I often act as though I suspect my children don’t possess the intelligence or self-control to prevent themselves from making every bad decision presented to them, when in reality, overwhelming evidence suggests that, in fact, my boys are quite capable of making sound decisions most of the time and that the few bad decisions they make are almost always rather routinely lousy and not dangerously so. So what I need to do is put in place a few safeguards for the really big dangers and for the temptations that are specific to my children and then step back.

One day this summer, I stepped outside and saw my nine year old walking by with a 2x4 about 6 feet long. Curious, I asked what he was doing. He reluctantly answered that he was going to use it as a sled to go down the hill behind our cottage. The 20-foot hill, riddled with new stumps, that ends right at the foundation of our house. It didn’t take more than a shocked look on my face for him to correctly guess that I thought that was a supremely bad idea. But I wonder what would have happened if I hadn’t seen him as he walked by. Would a brother or cousin have warned him that was a dangerous idea? Would he have gotten set at the top of the hill, looked down at the stumps and at the wall that would stop his descent, and decided not to sled down? I suspect fear almost certainly would have stopped him. But what if it didn’t? What if he went careening down the hill? What if one of the boys had started mixing chemicals in the boathouse? What if someone had fallen through the floor of the tree house? What if the three year old had wandered up to the road?

My husband often tells the boys that not getting the result you hoped for doesn’t mean the decision was wrong. (These are the deep, difficult conversations that stem from losing a game of Yahtzee.) A boy with a broken arm, a concussion, or (please, dear God, no) something far worse doesn’t mean that my choice to offer my boys the freedom to play unsupervised in the woods or walk alone to a friend’s house or cook his own breakfast was wrong.

My job as a parent is not to prevent harm from ever coming to my children. That will happen, regardless of how tightly I hold the reins. (In fact, many of our boys’ injuries have occurred when Mister or I were just feet away.) My job is to help shape them into the best men they can possibly be. And I cannot achieve that goal if my boys have no sense of who they are apart from me, if they have not been allowed to experiment and fail, if they do not feel trusted to make good choices, or if they have never experienced the thrill of a success crafted entirely of their own making. If I don’t provide this space for them to spread their wings, I am guaranteed to thwart their potential. That’s a certainty far scarier to me.

When I have doubts that I’m on the wrong path, the smiles on the boys' faces, the way they straighten their backs with pride, the confidence in their voices, and the delightful way their thoughts bubble and tumble from their mouths is all the reminder I need to continue giving them the space to learn and explore, to fail and succeed on their own.

And when they do need me – to celebrate with them, to commiserate, to slap on a Bandaid – they know I’ll be right here, dozing on the couch with my book spread open, waiting for them.
Posted by Katherine Welch at 12:19 PM