Then [the women who had come with Jesus from Galilee]
went home and prepared spices and perfumes.
But they rested on the Sabbath in obedience to the commandment.
Luke 23:56

This is all the Bible tells us about what any of Jesus’ followers did on the day between his death and resurrection. On Saturday.

But we can imagine, can’t we?

It is a dark day. Emotions are raw. We hear the weeping of the women. We imagine the prayers, the pleading that his promise of resurrection would be fulfilled. We imagine their conversations, grief mingled with hope, wondering how Friday happened and what Sunday will bring. We bear witness to their vigil. It is a period of anxious waiting.

We can imagine this scene so clearly because many of us have experienced this passage from death to resurrection, from old to new. This transitional space when everything has been upended. Saturday.

It is Saturday in my life.

I have recently experienced a fracture in a relationship that is so deep and so agonizing that it feels like a death. Friday. The relationship hasn’t been severed, but the old relationship is gone and what the new relationship will look like is painfully unclear. It is a period of intense mourning and unwanted, if necessary, growth. It is a time of upheaval. Of waiting and awaiting. Saturday. But I know that at the end of this transition lies the promise of resurrection. Sunday.

Every Easter, my former pastor would leave the pulpit during his sermon, walk the center aisle, and declare, “Resurrection is not the same thing as resuscitation; it is a radical transformation into an utterly new state of being.”

I’m not sure I heard a single thing my pastor said after hearing this for the first time. I had never stopped to wonder why the women and the twelve mistook Jesus for the gardener or insisted on touching his wounds. He didn’t look the same; he had been transformed into something entirely different from his previous earthly form.

This makes perfect sense though, doesn’t it? The concept of resurrection is meaningless if it’s a process that returns us to precisely the state in which we began, if it’s merely resuscitation. There must be change.

I won’t return to my previous state of being on Sunday. Nor will my relationship. Friday can’t be undone, and Saturday can’t be avoided. I’m being transformed from my hurt and broken and utterly exhausted self. I don’t know what I will look like on Sunday, but I know that day is coming and that I will be a new creation. Wiser, maybe. Stronger. Softer. I don’t know. But definitely different. New.

But for now, my home is Saturday.

Every day, I’m inching toward the day of resurrection. Some days I’m being dragged. Others I’m being carried. Occasionally, I stubbornly refuse to move. Many days, I’m crawling and clawing toward the glorious promise. 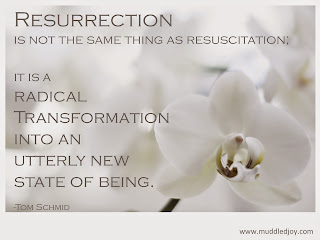 Posted by Katherine Welch at 6:23 AM 4 comments: