Why We Must Put an End to Kissing on the Playground

The other day, a friend posted the following status update on her Facebook page:

At school pick up, [my son in pre-K] tells me, ‘A girl kissed me at school, even though kissing is not allowed. She kissed me two times.’

She followed it with an emoticon expressing surprise, and a follow-up comment made it clear that her son had not wanted to be kissed by this little girl. Many people “liked” the status update, and comments were overwhelmingly positive: “That’s SOOO cute!!” “Heartbreaker.” “Love it!” There was exactly one comment expressing concern: mine.

There was a time when I would have grinned at my friend’s story, as well. Both of my big boys have had crushes on girls in their classes, and several girls have had crushes on my middle son. In fact, he used to come home every day from kindergarten grinning broadly about all the girls who chased him on the playground. My big guy could hardly sit still when he excitedly told me about his first crush. My littlest makes eyes at every girl he sees. And I vividly remember carefully grooming my brows with my Brownie pocket comb for my first crush, Brad, before school each day in first grade. There’s just something so sweet and innocent, giggly and fluttery about those first crushes. But in my friend’s story, the unwanted kissing crossed a line in my mind. The little girl who kissed her son was surely just as sweet and innocent as those who chased my son last year, but what do we do about the fact that her son didn’t want to be kissed?

In light of the horrific stories coming out of our nation’s colleges, in particular, I’ve been thinking a lot lately about sexual assault, rape culture, and consent. As the mother of three boys (ages 10, 6, and 3), I think especially about the possibility that, one day, one of my boys might, heaven forbid, perpetrate an assault (though I certainly understand that they could, also, be victims). It’s a horrible thought – it’s difficult to force my mind to go there – but I must. I must because, apparently, not thinking and talking about this subject has gotten us to this awful place in which sexual assault among friends, acquaintances, and significant others is commonplace.

It would be easier for me to say, “It can wait.” A three year old is, after all, too young for discussions about sex, so how does one teach about something as weighty as consent? And I feel woefully unequipped to tackle such a big, important subject. But waiting doesn’t make it easier, just more urgent, and surely, there is something that can be done now. After all, parenting is about teaching our children, even the littlest ones, critical lessons that will guide them throughout their lives. We are constantly laying the groundwork to help them become amazing adults.

So Mister and I have three, simple rules for our boys that we view as precursors to the bigger, harder discussions about rape and consent that must and will come later:


Children learn through play. When my children play, they aren’t engaged in meaningless activity; they are exploring social cues and physical laws and so much else while they’re on the playground or building a Lego castle or playing dress-up. By the time my boys reach puberty, the groundwork for countless lessons, including consent and self-control, will have been laid, whether Mister and I did it passively or actively.  I hope by teaching our boys these three, simple rules early and by keeping them consistent in childhood and the teen years, we will avoid any confusion that might arise if we were to have contradicting rules and expectations for play than for sexual activity. It’s not the end of the conversation, to be sure; it’s merely the beginning. But I hope our boys will understand that they must stop if and when their partners signal they’re in distress, in part, because we insisted they stop rough-housing when a brother was no longer having fun. I pray that our never allowing the excuse that a brother got what was coming will lay the groundwork for our boys’ understanding that they are, similarly, fully in control of all their choices and should never, ever, EVER use any variation of “but she asked for it” as an excuse for assault. I hope our boys understand that they, as well as their partners, have the right to say “no” in any encounter and demand that their denial be heeded, in part, because we allowed them to decline relatives’ hugs and kisses and other unwanted touches.

Including kisses on the playground. 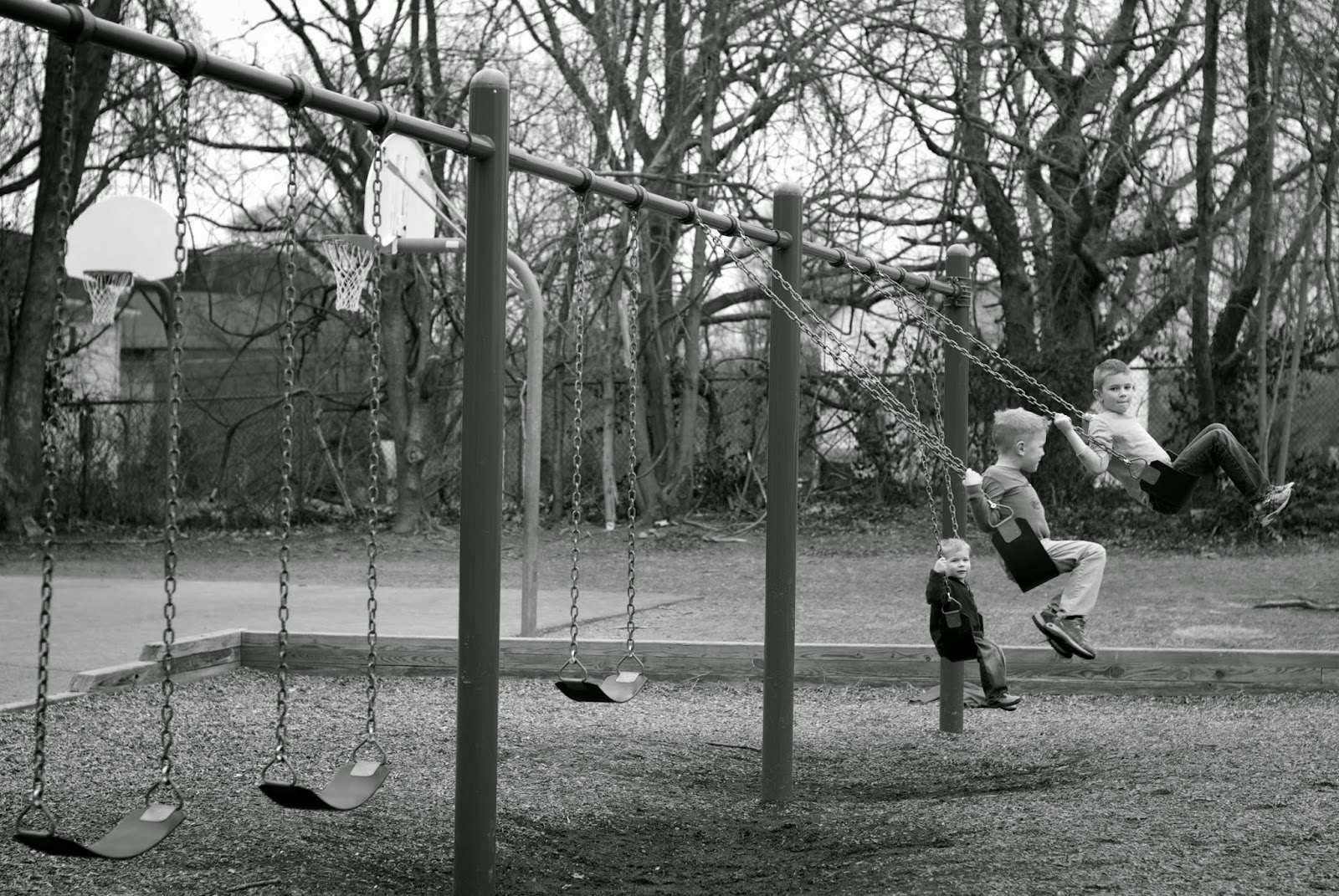 Posted by Katherine Welch at 5:11 PM